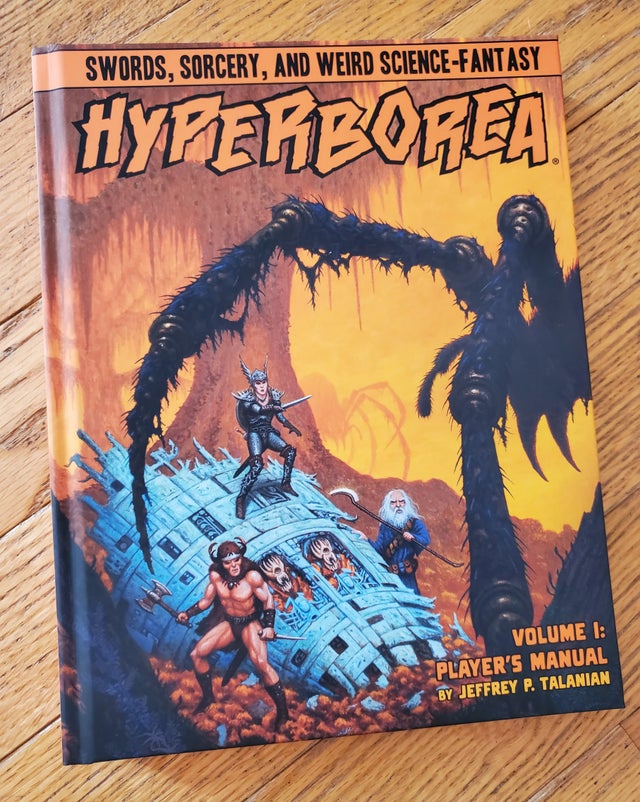 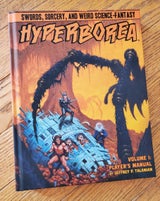 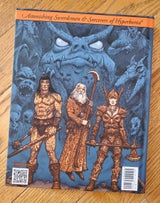 
HYPERBOREA is a role-playing game of swords, sorcery, and weird science-fantasy. It is played with paper, pencil, dice, and imagination. Participants include a referee and one or more players. The referee prepares and presents the adventure material (circumstances, challenges, quests, mysteries, etc.), and the players create player characters (PCs), including fighters, magicians, clerics, and thieves.


The heroes of a HYPERBOREA game delve dungeons filled with horrifying monsters, lethal traps, and bewildering puzzles; they explore savage wilderness frontiers and dangerous borderlands; they probe ancient ruins and investigate cursed tombs; they match steel against sorcery and sorcery against steel; and they plunder for gold, gems, and magical treasure.


HYPERBOREA is a “flat earth” realm hemmed in by the mystical boreas (“North Wind”), and under the scarlet light of a bloated, dying sun, its roiling seas spill eternal over the world’s rim. This world is in a perpetual state of decay and is populated by disharmonious men and women, hostile monsters, and weird, alien beings. The setting is adaptable and can be used independently or in conjunction with other milieux, published or home-brewed; indeed, HYPERBOREA might be just beyond the North Wind of any campaign setting.